A History of the Flag of Poland POLISH FLAG AND THE COAT OF ARMS

Are you wondering what the flag of Poland looks like and about the historical story behind the Polish flag? Read on and we’ll tell you all about the official flag of Poland.

The flag of Poland has a simple design and is very easy to remember while being rich in symbolism at the same time. The colors of the Polish flag are divided into two horizontal parts: the upper being white, and the lower of the color red. Poland flag colors are memorable, vibrant, and meaningful, all at the same time.

But why is the Polish flag red and white? As every flag in the world represents its country and what it stands for, the same goes for this one. With the Polish flag colors, the white is to represent the scarring of the Poland nation due to the many wars and misfortunes it’s been through, and the red represents the blood of people that gave their lives for it, as is mentioned in the well-known children’s rhyme ‘’Polak Maly’’ (‘’Little Pole’’), that all children and adults know by heart. The Polish flag color is something to be proud of, and so is the Poland flag symbolism.

There is also a variant of the flag known as the Polish army flag, designed so it combines both the Polish flag color code and the well-known elements, like the Polish eagle.

Interestingly, many coats of arms use an eagle, and there even is another flag that looks like Poland one: that of Indonesia and Monaco. Similar to the first glance (they have inverted colors), they often get confused, but the ‘’Polandia flag’’ is one of its own.

There is a variant of the Polish flag with a red crest, a white eagle with a golden beak and talons, or the national Polish coat of arms flag. This type of the official Polish flag has a background in Polish heraldry, but nowadays is used for official and international purposes. In Poland, the use of the national flag with the coat of arms is still restricted and should only be flown only on or in front of Polish embassies, consulates, or other government offices.

(Polish Flag With The Coat Of Arms)

Poland flag history begins at the same time in history as any other country’s flags. Almost from the earliest signs of human civilization, people used flags or vexilloids (flag-like objects), especially in warfare and when sailing, to mark the nation, the country, or the belief they belonged to. The first Polish vexilloids - the old Poland flag - probably looked like a cloth attached to a wooden pole or to a spear and were used as early as the 10th Century AD. In 996, when Poland became a Christian state, the Polish flag began to bear Christian symbols all through the Middle Ages. The first old Polish flag that looks anything like the one we know today dates to the reign of King Vladislau the Elbow-High (Lokietek) who ruled the kingdom of Poland at the beginning of the 14th Century: this kingdom of Poland flag being a red cloth with the White Eagle of the arms of Poland, and the flag of kingdom of Poland becoming well known in Europe. 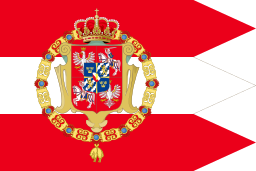 (Royal banner of the Polish-Lithuanian Commonwealth 1587-1668)

As the world moved on, in the 18th Century, European countries began using cockades, which were ornaments or ribbons pinned to the uniform, to mark the nationality of the military or the officials. Although there was no official rule then yet, the Polish wore cockades in the colors of their flag, at times even as plain white and sometimes adding blue color to the red and white combination, symbolizing Virgin Mary.

May 3rd marks one of the most important events of the Polish country, the adoption of the Constitution of 1791 (and is still celebrated as a national holiday), during its first anniversary white and red were introduced as the official national colors of Poland. The political left wore cockades in red, white, and blue instead. Then, in 1812, the General Confederation of the Kingdom of Poland adopted the red and blue cockades, which symbolized the unity of Poland and Lithuania (blue here being the color of Lithuania). In 1831, the national cockade of Poland became exclusively white and red.

In the time that followed, the flag itself was often used by people mixing the order of the white and red color, until the parliament introduced a white and red national flag post World War I, in 1919. Still, the flag itself then didn’t divide the colors equally, but by a 5:8 ratio, although today the colors divide the flag equally. The variant with the coat of arms changed during times, and the eagle on the flag was portrayed without the crown during the communist rule after WW2, from 1944 to 1990, until the flag looked as it does today - the Polish flag 2020, as shown on the Polish flag picture above. Interestingly, during communism, Poland was one of the few countries of the regime not to bear any communistic symbolism on its flag.

THE POLISH FLAG DURING WW2

Poland's flag during WW2 was non-existing as the state itself disappeared during the Nazi regime. It would be difficult to imagine the idea of flag hanging anywhere visible during WW2.

COAT OF ARMS OF POLAND

The Polish coat of arms dates back as long as its flag, to sometime in the 13th Century. It represents a white eagle on a red shield, with a golden beak and a crown, as already mentioned. Polish coat of arms meaning dates back to the times of Gniezno, the first capital of Poland before Warsaw, and its legend of how it came to be, so if you’re wondering what does the Polish eagle represent - do read on!

According to the story, three brothers were looking for a place to settle, until finally, they saw a hill with old oak and a white eagle on the top. One of the brothers saw the eagle and decided to make his settlement there, calling the city Gniezno as an homage to the word ‘’gniazdo’’, meaning a bird’s nest. This is how the Polish eagle came to hold an important place in the history of the country, and the way the flag looks today, while the Polish eagle coat of arms remains a symbol that is often used as a sign of patriotism.

So if you are Polish living in or out of Poland, be proud of your white and red striped Polska flag!

Now that we’ve answered your question concerning: what does a Polish flag look like, you must be wondering where to buy the Polish flag and how to show it off? Although we don’t offer vintage or a Polish-Lithuanian Commonwealth flag for sale, do check out our collection of Polish flags and items for sale.